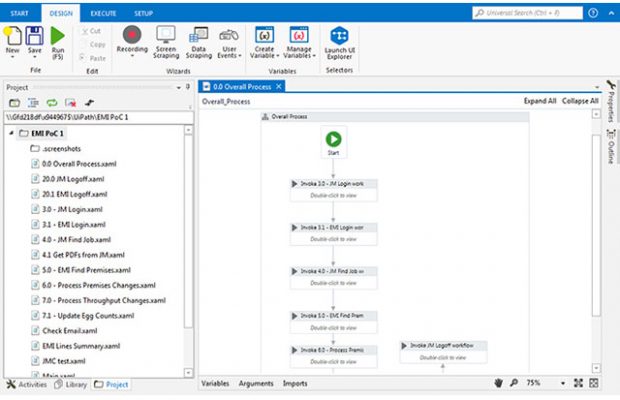 Let's talk about legacy software. Every large organisation has some. We have plenty. When we say 'legacy', we usually mean software and systems that are old. But old software isn’t necessarily bad software.

Software that’s decades old can be very reliable and dependable, doing the job it was designed to do in the first place. That’s why it sticks around for so long. It’s not broken, so no-one sees any need to fix it.

It’s when that software is no longer updated and maintained that the real problems start to arise.

That’s the point when you have to decide: what’s the right balance to strike between old software and new software? When is it right to implement clever workarounds to make this old but dependable legacy system work with newer ones?

The Animal and Plant Health Agency (APHA) is one of Defra's delivery bodies, and its job is safeguarding animal and plant health for the benefit of people, the environment and the economy.

Legislation exists that says how various aspects of animal and plant health should be managed and implemented. There are standards that farmers and food producers have to stick to. APHA exists to uphold and enforce the rules and the standards.

Much of its work revolves around inspections. Over 600 inspectors up and down the UK visit farms and other premises, checking that the standards are being met. There are all sorts of different types of inspection, such as egg marketing, poultry meat marketing, animal by-products, international catering waste, and plant health, to name just a few.

Until very recently, those inspectors recorded all their inspection data on paper forms attached to clipboards. They took the forms back to their offices, and manually entered the data they'd collected into a computer system. This is a process called 'Field Service Management (FSM)', and APHA has been working hard to modernise it.

The first part of that modernisation process is to schedule appointments and collect data electronically using smartphones and tablets – gone are the days of paper and clipboards.

The second part is aggregating, analysing and storing the data that's been collected. For years, this has been done using separate database systems, each designed for a specific inspection type, so they’re all slightly different and store data in different ways. Most of these systems have been around for a very long time and are now considered legacy technology.

APHA would like to make the new field data collection system communicate directly with the legacy systems, but that’s really hard to do because the 2 different systems can’t talk to each other. So as a workaround, APHA had to resort to human hands, paying people to manually copy data from one computer screen to another. This is laborious, rather boring for those involved and prone to human error.

There’s no doubt in our minds that in the long term, those legacy systems will have to be replaced. But that will be a huge task, it will take years. In the short term, APHA needed a quick way to minimise the growing need for human hands. Copying data from one place to another, quickly and reliably, is work that computers can do really well. Which is where the robots come in.

RPA software is capable of understanding simple repetitive tasks that humans might do using a computer, and then repeating them very fast, with no errors, all day and all night.

The APHA team recently completed a trial of the RPA software. They trained it to do a simple data entry task that's currently being done by humans. It effectively acts as a bridge between the new FSM data collection tool, and the legacy systems where the inspection data is stored.

In just one day with the new software, the APHA team were able to reliably automate data entry for one type of field inspection. This experiment immediately got the team wondering: how much more could they automate?

It's still early days yet, and the RPA software doesn't solve all of our problems. Some data still has to be handled by humans as it’s not cost effective to program the robot to take care of every exception and eventuality. But most of it, most of the time, can be handled by the robot.

We know this is a quick fix

We know that building a bridge between old and new doesn't take away the fact that the old system is hard to maintain. We know that there are better ways of doing this, over the long term. We're already looking into them.

But in the short term, this is a good enough solution. We're using off-the-shelf software to solve a problem, to get computers doing what computers do well so that we can free up time for humans to do what humans do well.

This is one of those times.