The Defra group has previously been called a trailblazer over its advanced use of satellites to inform policy decisions, but for data to impact on operational work of Defra group organisations like the Environment Agency, it has to be made analysis-ready for officers in the field.

We use Sentinel 2 satellite imagery and LiDAR data to help us locate bare, sloping fields that might cause sediment pollution (sometimes referred to as ‘agricultural run-off’ into rivers in rural Herefordshire. Environment Agency Enforcement Officers then work with our Geomatics team to make the most of some very clever online GIS technology.

“One of the biggest threats to the River Wye SAC comes from sediment runoff and associated phosphate pollution caused by intensive arable farming. The harvesting of potato and maize crops in particular can leave fields bare just in time for autumn rains. Herefordshire’s famous sandy red soils are generally fine and can become extremely mobile during heavy storms or ‘cloud-burst’ rain events. It is not unusual for huge quantities of sediment to enter watercourses and smother delicate gravel ecosystems, impacting on fish breeding. 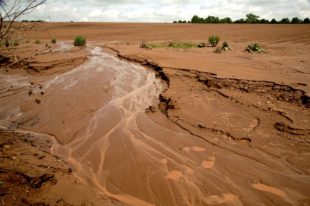 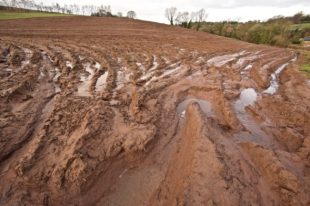 Previously Environment Officers have struggled to locate high risk fields where soil is likely to run into rivers. Crop rotation, and the very remote rural nature of Herefordshire, make it hard for us to pinpoint ‘at-risk’ fields.. We are trialling the use of a combination of high-frequency Sentinel satellite imagery and LiDAR data to produce a simple risk-based model to estimate where bare fields are most likely to coincide with slopes that are greater than 6 degrees (1:9.5) during autumn, after potato and maize have been harvested. This can be done either predictively with less certainty using multiple satellite images during the growing season, or with a greater amount of certainty through observation if there is a cloud free image during the autumn months.

We can now estimate where risky crops such as potato and maize have been grown and where there is potentially a high risk of pollution. This exciting use of the latest technology could really help Enforcement Officers on the ground fine-tune their enforcement work using an evidence-based targeting approach.

This wider use of satellite data is being promoted through Defra’s Earth Observation Centre of Excellence. It is one of many uses. Another topic being developed with the Rural Payments Agency is Crop mapping derived from the Sentinel satellites.

The work at the #EOCoE is also linking up with the Digital Transformation team  and Data Transformation Programme (@opendefra) to deliver via online mapping services across Defra.