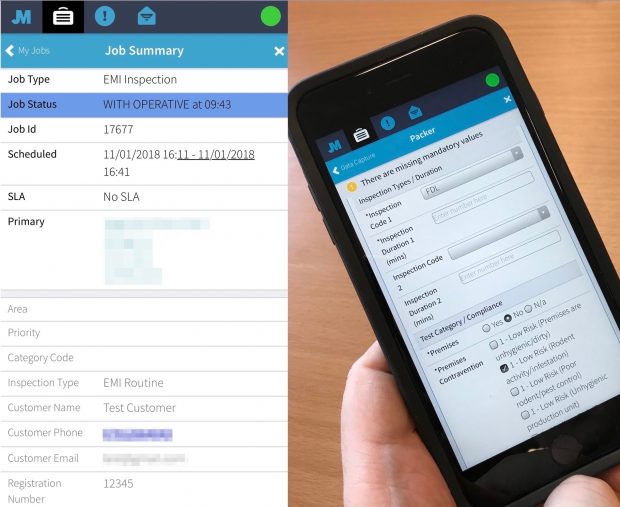 The Animal and Plant Health Agency (APHA) is one of Defra's delivery bodies. It is responsible for safeguarding animal and plant health for the benefit of people, the environment and the economy.

Part of its work involves inspecting all sorts of premises and sites around the country, and maintaining data about what those inspections say.

There are about 500 inspectors, who are responsible for checking around 200 different aspects of animal and plant health.

Over the years, different data management and storage processes have grown up to handle the data for each topic of inspection. In most cases, the data gathered by inspectors in the field has been stored in databases - but the process for getting the data into each database isn’t standardised. The databases aren’t all built the same way. It’s not always possible to share data between them.

Before you even think of going to work on one, an egg has to start in a chicken, be laid, then collected, transported, stored and sold. Along the way it will pass through farms, machines, lorries, warehouses and refrigerators. Part of APHA's work involves making sure that the whole process meets regulatory standards.

The chickens must be accommodated properly, and regularly checked for disease. The eggs must be handled, moved and kept safely - to be sure, for example, that there's minimal risk of salmonella bacteria developing.

All of this is inspected and checked by a team of about 30 APHA inspectors. Until this year, each inspector had a fixed geographical patch to cover, and worked only with the farmers and commercial premises within that patch. Data was gathered on paper, sometimes using handwritten carbon-copies. When they’d finished, the inspectors had to manually input the data they'd gathered into a 17-year-old Egg Marketing Inspector (EMI) database - but that could be several days after the actual inspection. There were few standards for data collection and storage, and limited IT features that helped with data validation.

We had to modernise this process. This is the story of how we’ve started.

For over a year, Defra has been running something called the Field Activity Programme. Its aims are to save money, reduce the number of visits by Defra staff to farmers, deliver a better service for customers, and cut down on red tape.

Different Defra organisations might visit the same farm to inspect slightly different things within days of one another. Among other things, the programme is working on co-ordinating these visits and making them more efficient.

As part of that work, we’ve been rolling out something we refer to as the Field Service Management (FSM) tool, starting with the egg marketing inspectors in APHA. Ultimately, it might be possible to roll the same technology out more widely to other inspectors in other Defra delivery bodies.

To cut a long story short, the FSM tool is software that digitises a lot of the paperwork that inspectors have been lumbered with in the past.

Buying the software we need

You hear a lot these days about government doing more software development in-house, which is a good thing. But sometimes it's better to buy a commercial product, where that's the more sensible choice. And in this case, it was. Defra paid for a software product called Kirona, developed by a company of the same name.

The Kirona software allows the team to develop complex, customised web forms, and the result is mobile software that inspectors can use on a smartphone or tablet (pictured at the top of this post).

The same software matches up available inspectors with the inspections to be done that month, plus any backlog. From early 2018, it will start calculating which inspector is geographically closest to which job, and allocate jobs accordingly. (In the past, each inspector was responsible for a fixed geographical patch.)

On their smartphones, the inspectors are able to declare when they're travelling, when they arrive, and when they start or finish each inspection. They also record and report all the inspection data. Thanks to the customised web forms created using Kirona, the inspectors can do pretty much everything without touching a piece of paper.

At the end of the inspection, the software automatically formats the data and sends it to a team in the Defra office in Worcester. The inspection reports are ready within 1 working day, and the inspection details get added to the database within 5 working days.

This is the right thing to do

Not everything about this new system is perfect - yet.

At the moment, the data that arrives in Worcester still has to be keyed in by hand into the 17-year-old EMI database. That’s something we need to fix.

And introducing the new system has caused difficulties for the inspectors, who have had to make considerable changes to the way they work. We’re grateful to them for their patience while we move from old to new.

But the important thing here is changing from a decades-old, paper-based system to a modern, digital one. Adopting a modern, digital approach is the right thing to do in the longer term, despite the difficulties it brings during the transition.

The team are working in agile ways, which is new to some of them and to some of their management team. Again, this has brought its own challenges (being agile in a larger non-agile organisation always does), but it has also meant that that the team could build iteratively, and faster. From very early on, they did research with users (in this case, inspectors) to help them design forms in Kirona that would be useful and understandable.

The roll-out of this new system to about 30 egg inspectors happened back in October, followed by a similar roll-out to about 40 more who undertake Avian Influenza surveillance. Slowly and steadily, the roll-out will continue as more inspectors, covering the whole country and all 200 topics of inspection, adopt similar new systems.

Now, step back and consider the bigger picture: there's a clear repeatable design pattern here: government as a whole (not just Defra) has many services that need to gather data from field operatives, bring it all together in one place, then store it in ways that make it easy to access and easy to use. The easier it is to use, the more useful it becomes as a tool to help us make decisions.

It’s early days yet, but the team are thinking about ways to make as much of their work as possible re-usable or repeatable.

The story we've just told you is a thin slice through a much larger and more complex system. The work that APHA does is vital for keeping the country healthy and safe from disease. Making that work easier for the people who do it, and more effective in terms of the the data that emerges, is the least we can do.